Last august/september 2011, we have had a new arrival here at Montes de Almachada. It´s a couple, about twice/three times the size of a Blackbird, black with red wing-ends, yellow beak, long quite slim body and long tail and what makes it very unusual is the sound it makes. Like a very loud motor. Sometimes there are short callings and specially in the mornings, a long loud noise.
We have spoken to all the neighbours and nobody has ever seen or heard such a bird.
Patrick and I have spent many hours on internet and gone through all the birdbooks we own, but with no result.
Posted by pironnet at 1:44 AM No comments:


At night and specially at dawn we hear the nightingale singing. Its quite magical sitting outside in a warm spring or summer night listening. We have different woodlands here at the finca and that seems to be their favourite place.
You can also hear them during the day, together with all the other birds singing.
In September the  Nightingale emigrates to tropical Africa and will gain around 50% of it´s weight in order to be able to fly the long distance. It returns to us in april, the male about ten days before the female. The bird can be quite difficult to see as it is small (15 cm), have plain brown feathers and a red-sided tail.
The female builds her nest in the bushes in the shadow of trees. In May there will be 5-6 eggs of olive green colour. The young birds will only stay 11-12 days in the nest.
The young Nightingale has to learn to sing, it only needs to hear an adult singing to be able to imitate. When there is a Nightingale which is a good singer it automatically improves the quality of the other Nightingale´s song in the same area. On the other hand if a good singer dies the new generation loses quality. There are areas where the birds only know one monotonous song.
The song will be strong and loud in spring and  from the second part of June it will sing less vigorously and softer. The male is then trying to teach the young birds, who will repeat the different strophes. 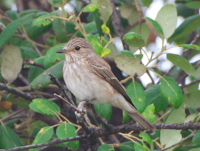 Posted by pironnet at 3:57 AM No comments: 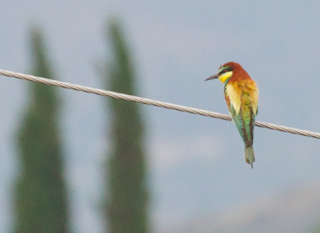 I looked out from the kitchen window and there were lots of swallows flying in the valley above the river. But as I looked closer they looked bigger than swallows and had beautiful colours. I could now see that it was Bee-eaters, a whole flock of them, gliding back and forward, busy catching insects.
I have since learned that they, as the name suggests, eat bees, wasps and other flying insects, which they catch in the air. Honey bees predominate in their diet. Before eating, the Bee-eater removes the sting by repeatedly hitting and rubbing the insects on a hard surface. During this process, pressure is applied to the insect, thereby extracting most of the venom.
Bee-eaters are seasonally monogamous. The birds form colonies by nesting in burrows tunnelled into the side of sandy banks at ground level or into the side of earth cliffs. They live in colonies and lay 2-9 eggs per clutch.
The ones that are here in southern Spain are migrants to West and South Africa.
Photo: courtesy of Nina, a very dear guest
Posted by pironnet at 10:25 AM No comments: 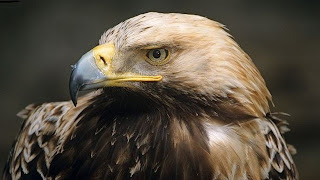 Wow, what a powerful experience... My husband Patrick and I were standing by our 38 year old parrot, Jaco´s cage, (a big outside cage where he lives all year round) when all of a sudden Jaco squeaked and disappeared into his little house. We could feel a tremendous shadow above us, both of us ducked and when looking up only a couple of meters above us, there was an enormous Iberian Imperial Eagle. We could see her golden eyes moving without turning the head, evaluating us. We felt like we were guests in her territory. Afterwards we vere quite overwhelmed and awed, what a beautiful bird.
This large eagle has a pale cream head and neck, but dark brown feathers elsewhere. There is a distinctive white area on the shoulders and a pale grey area on the upper tail and the species can be recognised by its particularly flat gliding flight. It gives a repeated barking ‘owk' when calling. Juveniles are red-brown fading to pale brown with dark flight feathers and white fringes. It reaches maturity and also sexual maturity at the age of 5 years. The average size of an adult is 78 to 83 cm high and 2,8 kgs, but the female, who is bigger than the male, can reach 3,5 kgs. The lenght between the wings is 1,8-2,1m. They live an average of 20 years.
The Iberian Imperial Eagle is monogamous and adult eagles occupy territories in pairs all year-round. They defend these territories from intrusion by other raptors, allowing only immature members of their own species to enter. Nests are built in tall oak trees, in small stands of trees far from human disturbance. During the breeding season, both the male and female will participate in the incubation of the eggs and the care of the chicks. Prey is torn into manageable pieces for the chicks until they are ready to hunt for themselves. Parent eagles will even shelter the chicks from heavy rain. The young bird will leave the nest 65 to 78 days after birth, but will still be fed by their parents during four months.

Feeding almost exclusively on rabbits, the Spanish eagle's population density, range and reproductive performance are influenced by the abundance and distribution of prey in the area. The bird is very vulnerable and their populatation have diminished due to deaths resulting from electrocution on electricity lines and the consumption of poisons used to control predators. There are an estimated 350-400 Iberian Imperial Eagles in Spain.
Posted by pironnet at 2:51 AM No comments: 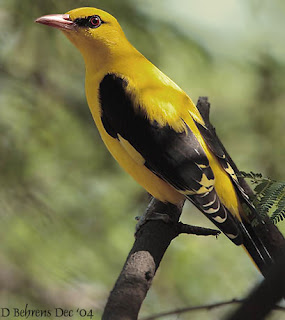 At first I thought there was a cat in the tree behind our house. I rushed up looking for the poor cat. Silence... and no cat. I spent a whole afternoon sitting by different trees trying to see where the strange sound came from. At last... a Golden Oriole , buttercup-yellow, black wings and blood red beak, the male, and the female, who was making the cat-like squalling, greener and streaked below (similar colours to a Green Woodpecker in flight). Their call is a screech like a jay, but the song is a beautiful fluting weela-we-ooo or -iii-ole, unmistakable once heard.
Since then I avait impatiently every year to hear the song of the Golden Oriole and for me the spring has arrived.

The Golden Oriole is very secretive and difficult to see. They are about 24cm (9.5"),weight 68-75g. Breed in tall deciduos trees in woodland, orchards or parks and spend much of their time in tree canopies. They feed on insects and fruit, are specially fond of figs and will come out from hiding to fetch the fruit. The Golden Oriole migrates to sub-Saharan Africa in mid August, as far south as Nambia and South Africa. Male Golden Oriole returns April-May, often arriving a week or more before the female. The courtship is spectacular. The male persues the female at high speeds through and above the trees, following so closely that he almost touches her tail. Their remarkable nest is a deep closely-woven cup, slung like a hammock from the branches of a horizontal fork near the end of a bough and well withstand storms. They lay 3-6 eggs, which are white-pink with brown/black spots. At nesting time the parents will protect their nest against for example crows, magpies, cuckoos and kestrels that are crossing their territory.
Posted by pironnet at 1:27 AM No comments: